An efficient snapshot of South Africa’s office property market as at October 2019 – using, as a proxy for the larger industry, the performance of three blue chip nodes in Johannesburg. We also reveal two new-to-industry metrics: average space density, and performance by owner type. 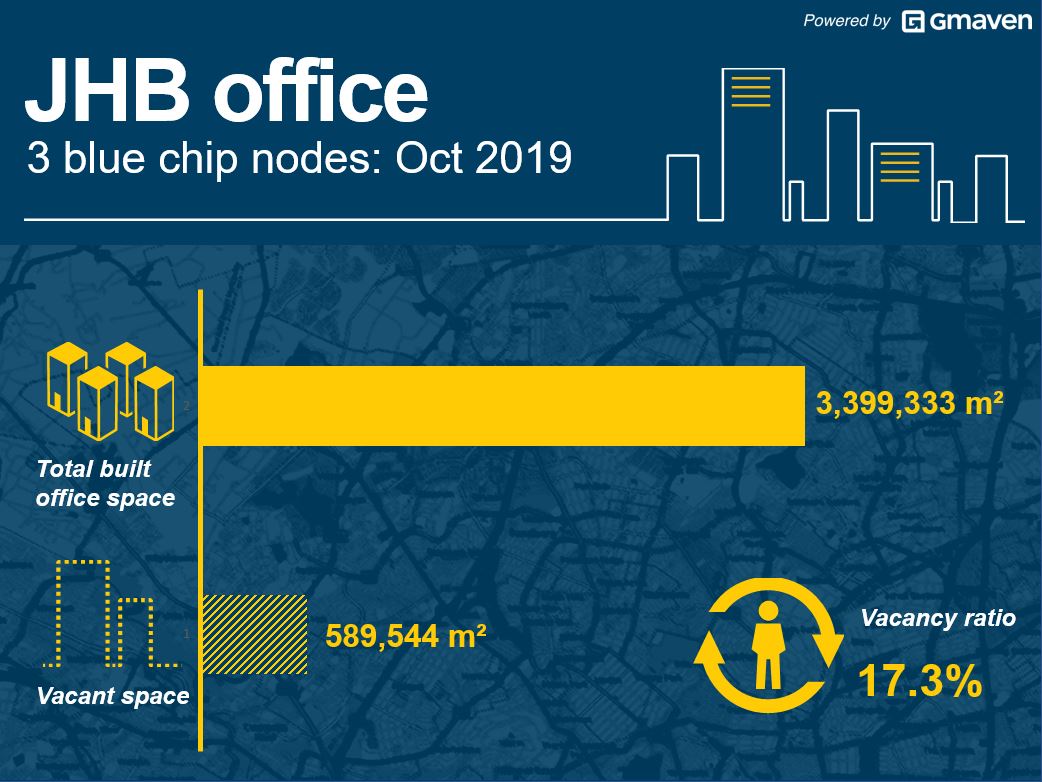 “When America sneezes, the whole world catches a cold”

(To be fair, this quote, initially referring to France, originated from Klemens von Metternich, Austrian Foreign Minister from 1809 to 1848)

Similarly, the performance and state of Sandton, Bryanston and Rosebank – as representatives for prestigious office nodes in South Africa (see here) – are useful indicators of SA’s blue chip office market as a whole.

Going more granular, the above three nodes are useful barometers** for the state of Johannesburg’s office market as at Oct 2019.

First, some fundamentals – how do the nodes compare?

Bryanston is your classic South African decentralised, high quality node. Not pedestrian friendly, and with generally reasonable access to retail, it is surrounded by high income residential suburbs, and transport-serviced by road.

Sandton and Rosebank are similar blue chip office nodes: they boast access to rail, enjoy high density zoning, and are supported by high density residential – conducive to a live-work-play environment.

This below image explains how developed or undeveloped the nodes are (calculation below: office rentable area divided by land use for office).

In other words: for every square meter of office land, how many square meters of rentable area has been built. For example, looking at below, for every 1 m² of land dedicated to office, Bryanston has 0.38 m² of office built) 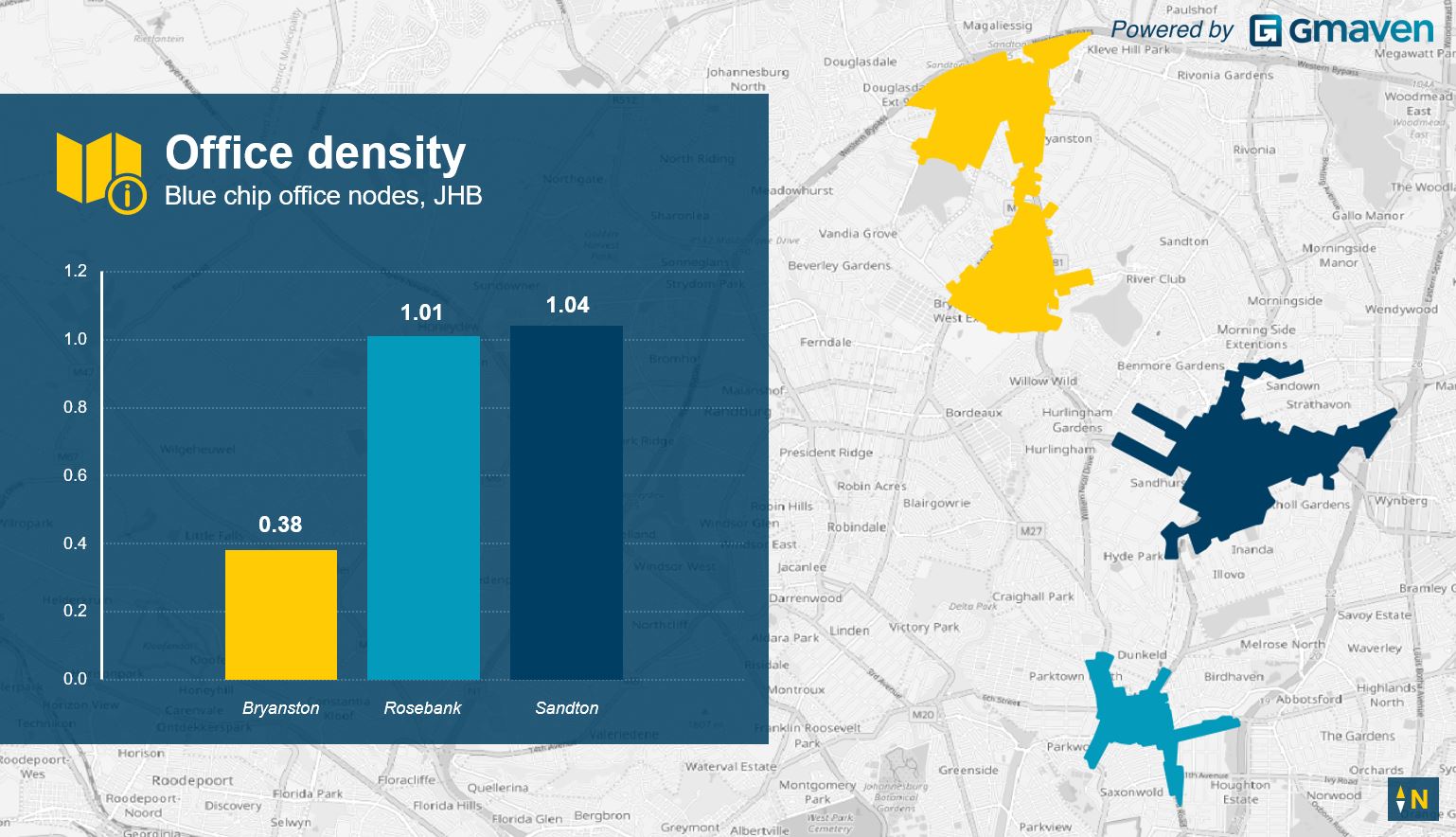 How are the nodes performing, and performing against each other?

Very simply, these are the vacancy rates according to the wider definition¹ (wide and narrow vacancy definitions is unpacked at the foot of this) 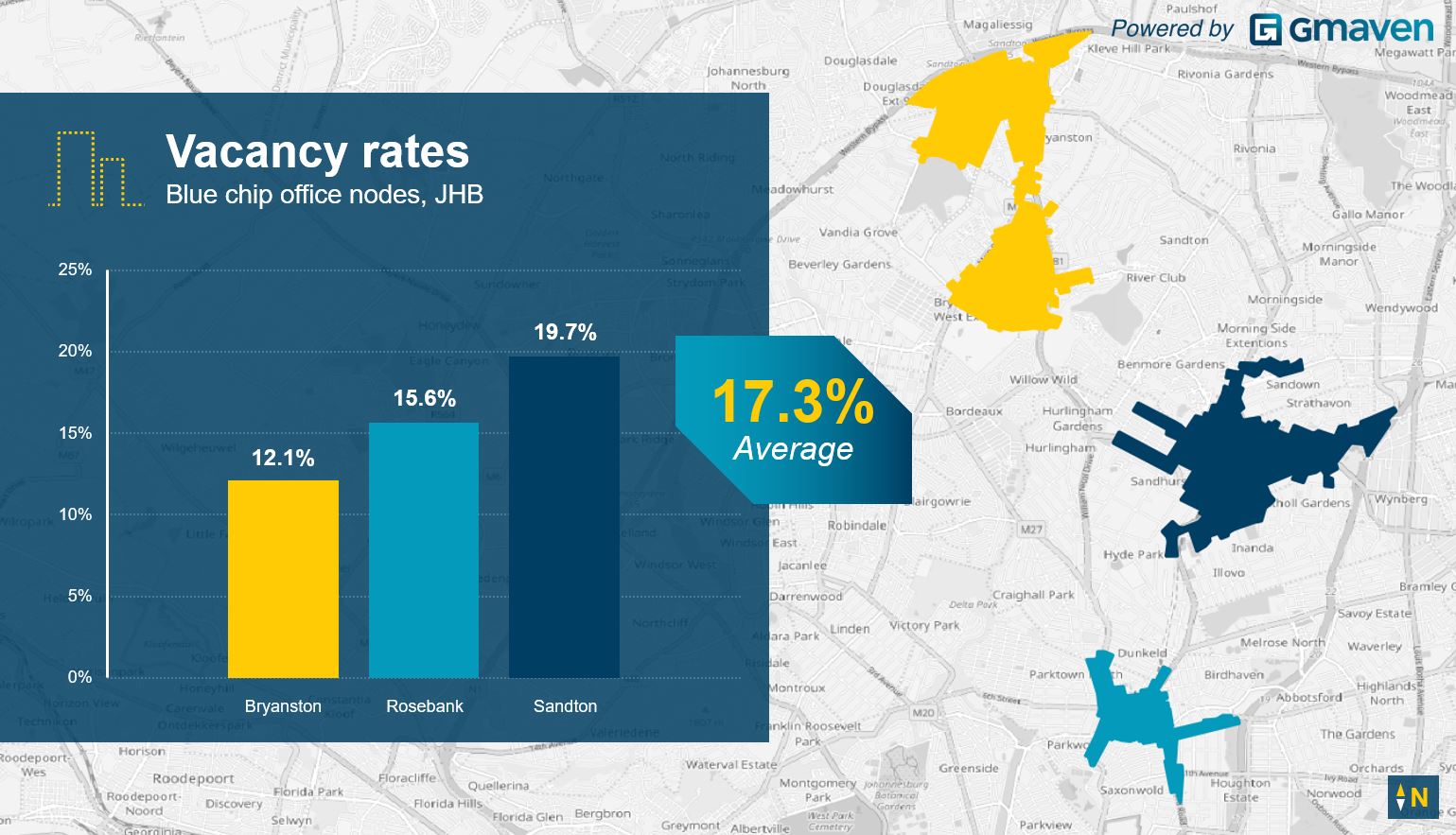 Sandton’s trendline of reducing vacancies is looking good – but vacancy levels at 19.7% are still high.

Rosebank’s 15.6% vacancy can be attributed to recent on-risk developments coming onstream. Adjusting for only two properties, total Rosebank vacancies would plummet to an industry-beating 9.1%! (46.1K m² has formally come live in the Rosebank node in the last 6 weeks)

Bryanston’s vacancy rate of 12.1% is below market – in the current climate, for Gauteng, the node is performing well.

Let’s drill deeper into the vacancies…

How are those vacancies made up? (Grade by totals)

…Which properties are pulling their weight, and where does there appear to be an over-supply in blue chip office nodes? 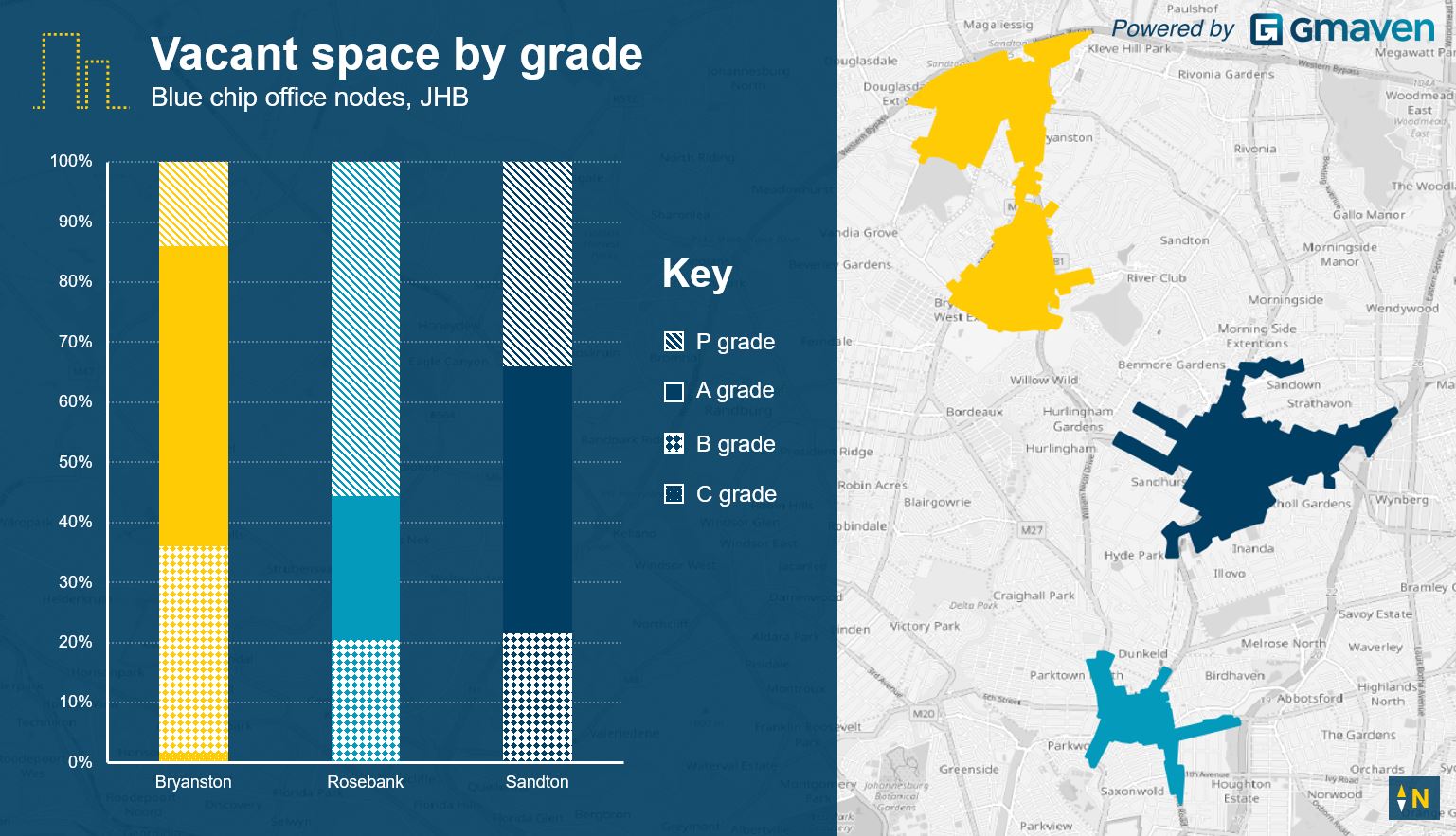 The comparatively low level of Bryanston vacant P grade space points to low levels of recent on-risk development (new builds tend to be spec’d out as P grade). In turn, this can be explained by the following

How are those vacancies made up? (Grade by %s)

This is more insightful, but needs to be viewed in conjunction with above for context. It answers the question: which grades are not performing per node… 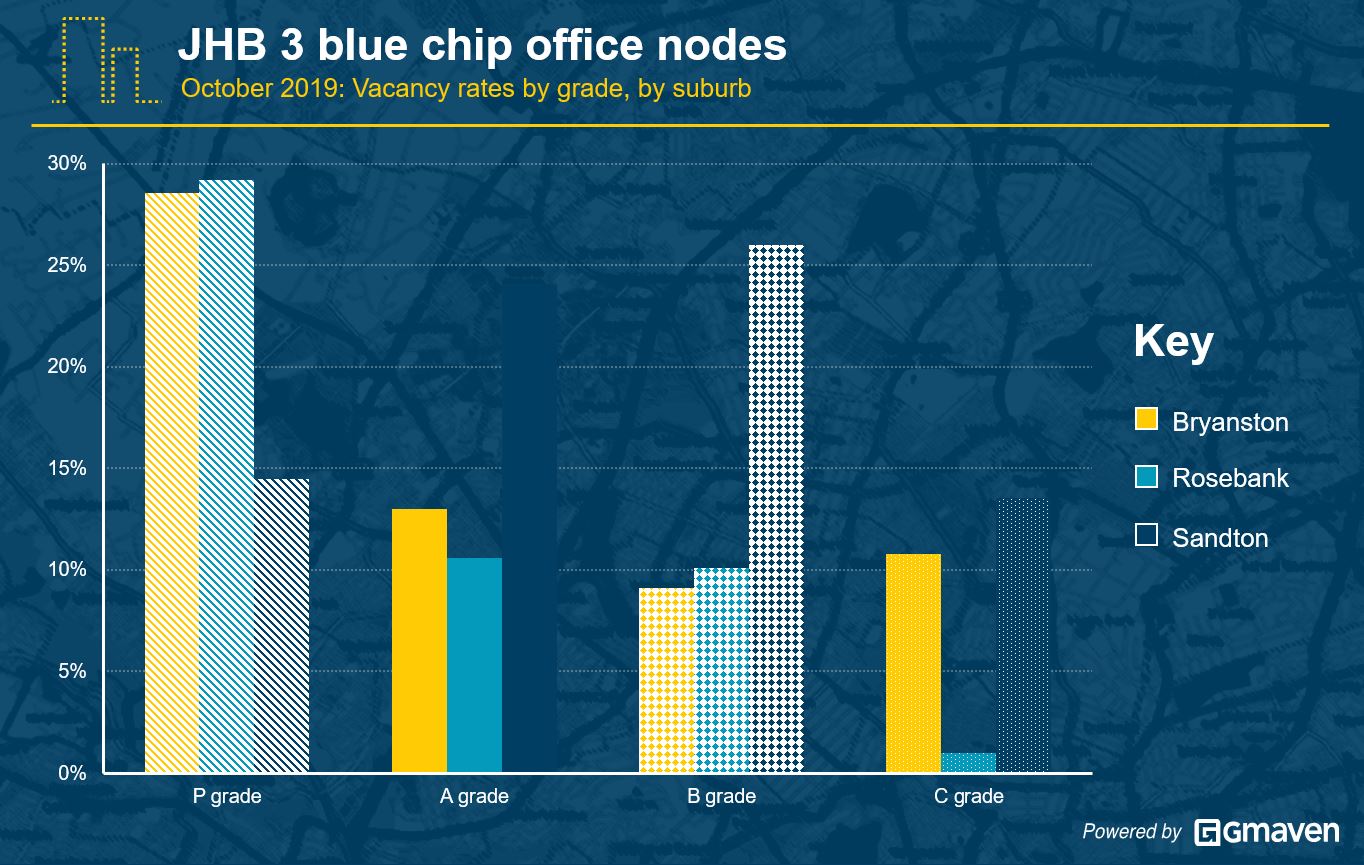 Sandton’s A and B grade vacancies are running at 24.1% and 26.0% respectively. A and B grade space accounts for 44% and 22% of total Sandton vacant area, so these values are not insignificant. However the product is priced to move.

Compared to Sandton, Rosebank and Bryanston A and B grade office is around half as vacant.

For analysis purposes, C grade office can be ignored across the board – the vacant total areas are inconsequential.

This is a straight totals comparison (no vacancy rates). According to the above chart, Rosebank has a lot of P grade space available (55,721 m², or 56% of total), while a higher chunk (29,466 m², or 34%) of Bryanston’s (proportionately lower) vacancies is made up of B grade space. 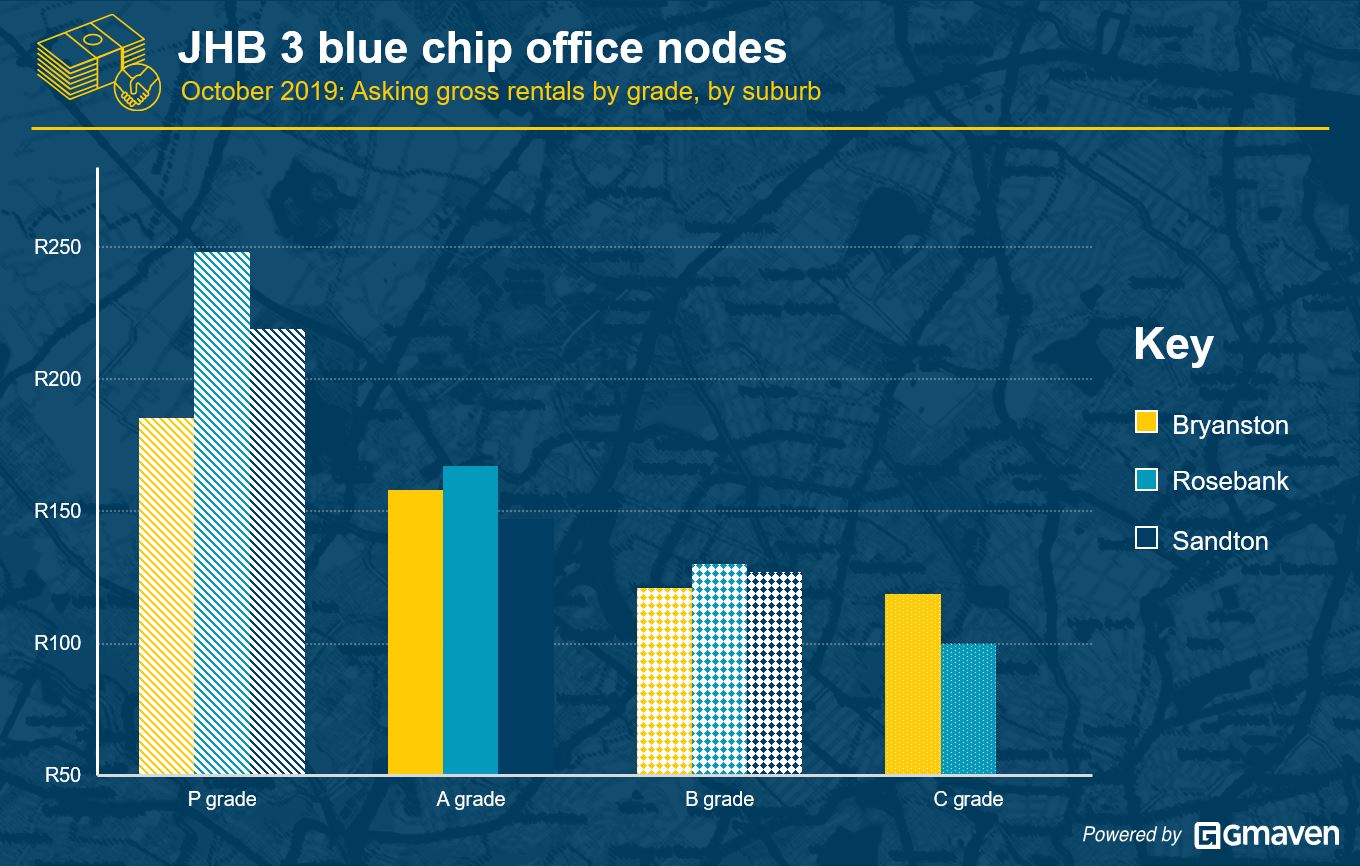 The traffic-friendly Rosebank location, as a high density, mixed-use CBD, with good transport access, is leading the charge for all space B grade and upward.

B grade office, which accounts for 23% of total space across the nodes (A grade is highest at 41%, followed by P grade at 35%), is fairly consistent across between all areas.

C grade’s vacancies is so inconsequential, it can be ignored.

So, with us now tracking owner categories for these blue chip office nodes – what is the….

Performance of each node by owner type? 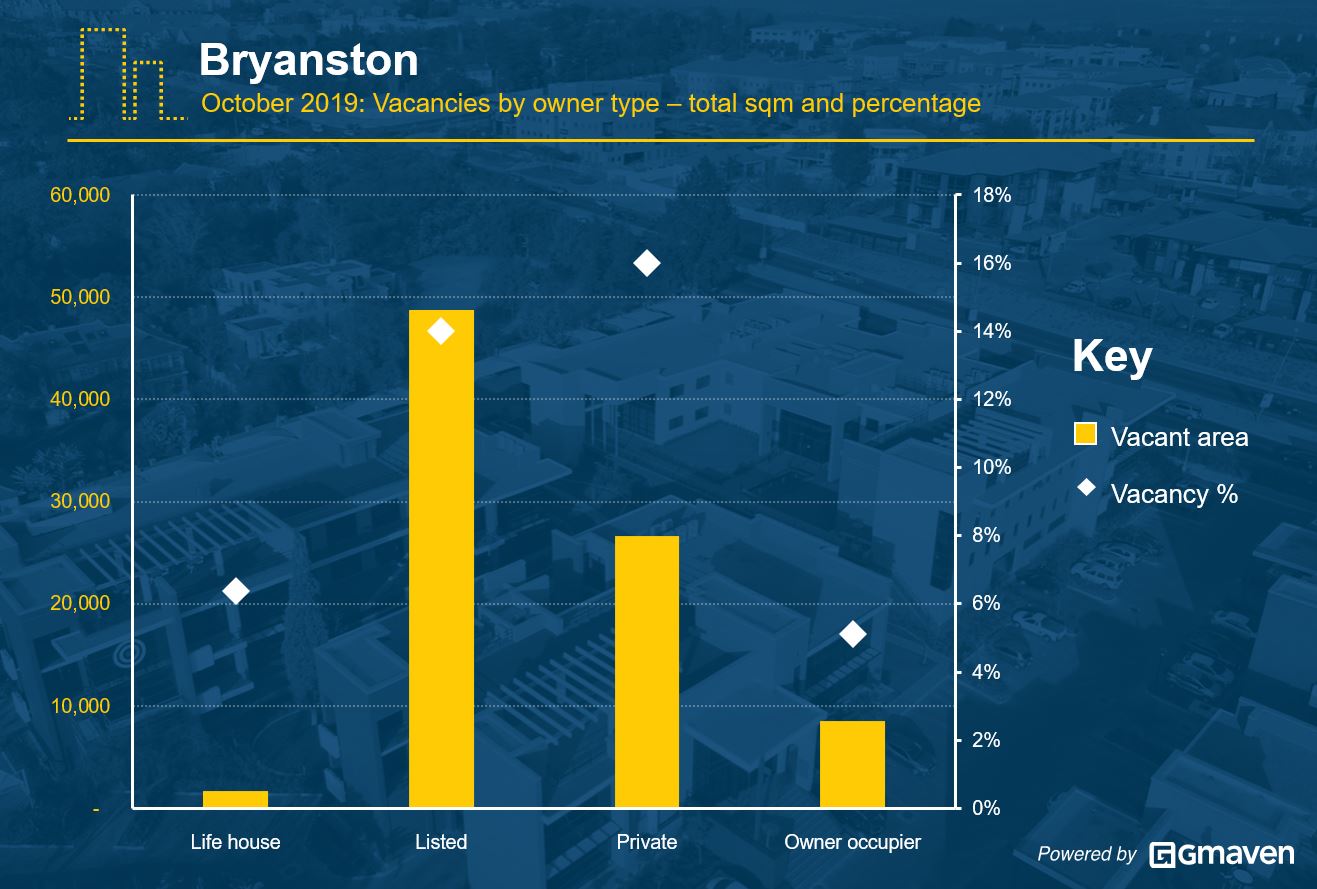 Why is life house penetration under weight? Bryanston’s lower zoning means that properties are generally lower-valued – such assets are not traditionally attractive to life houses.

Private’s high vacancy rate is unusual. It is explained by major tenants relocating from the Bryanston the node, and tenant failures. 76% of private vacancies sit in the hands of four property owners, and straddles just seven properties. 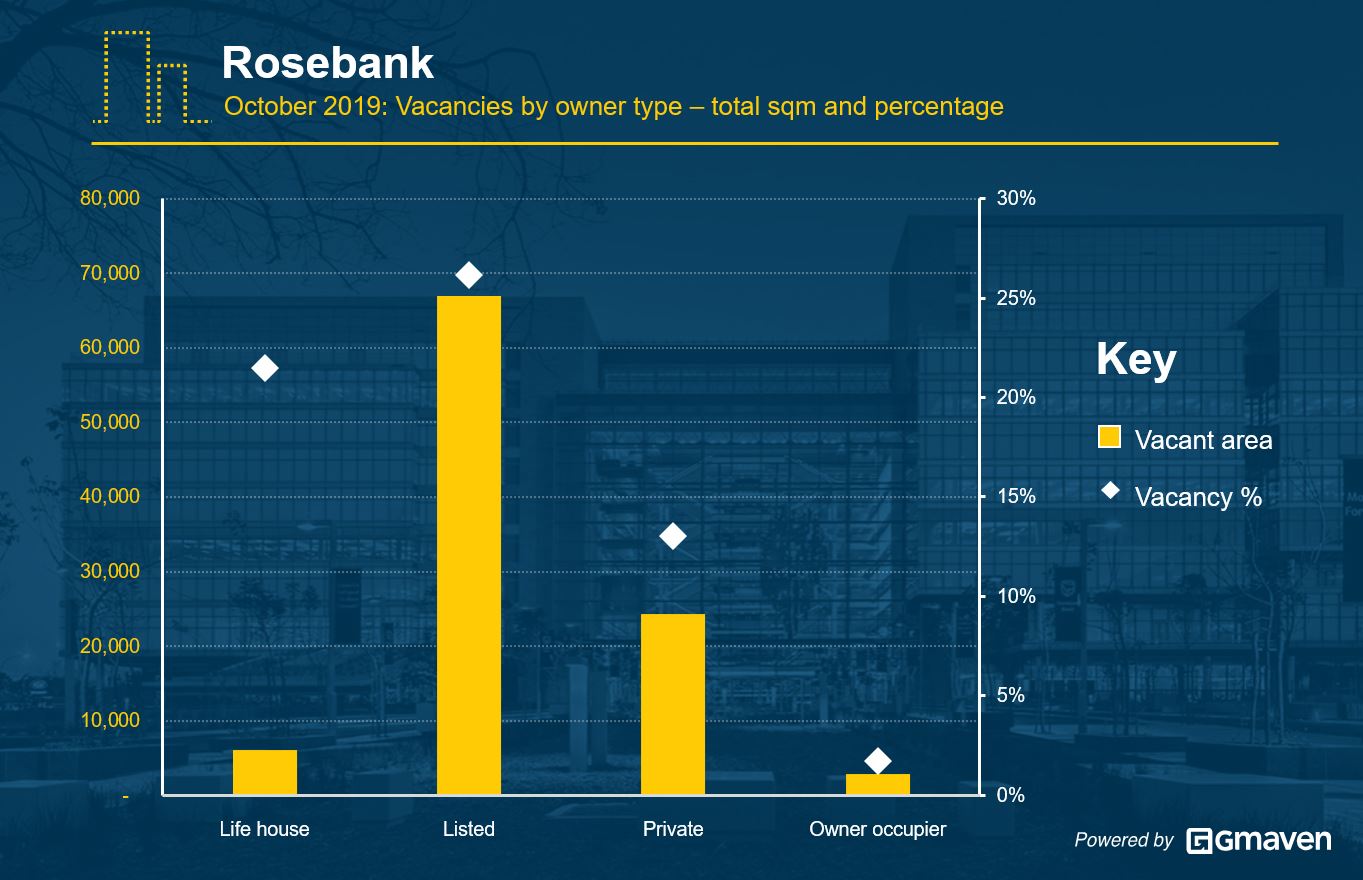 The big contributors to Rosebank vacancies, at 66.9K m² and 24.4K m² respectively, are the listed and private players.

The listed stock overhang of 26% is largely due to on risk developments. Various significant leasing deals underway, if successfully concluded, will assist in taking up this excess space. 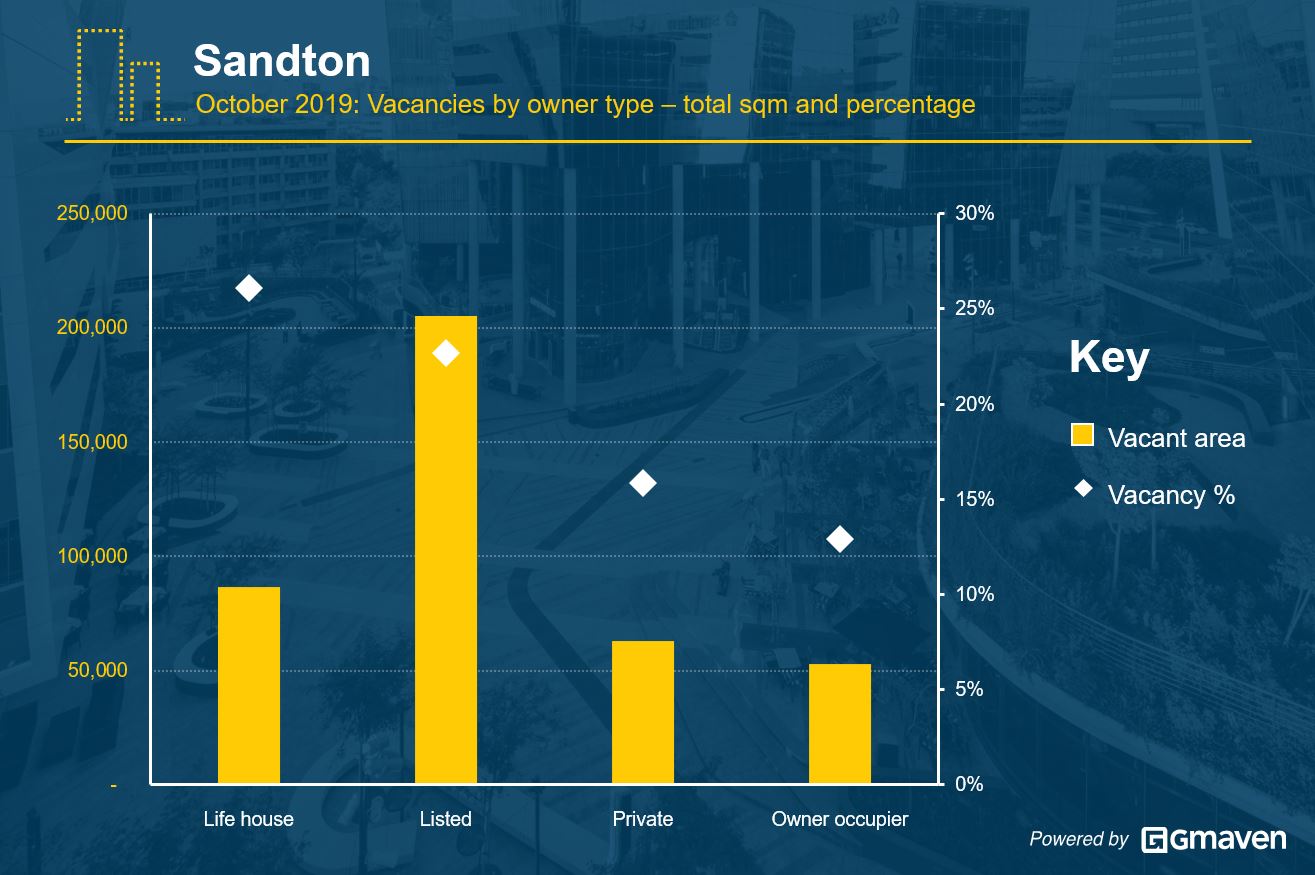 For starters, academically, no definition is right or wrong. However, for us at Gmaven, what is critical is that data is stored in a way that allows various space definitions to be applied. So data can be processed according to each definition.

Why should we care? A short context-providing preamble

Imagine there was a landlord, let’s call her Landlord A, who owned a property in a large node, with one of her properties being the only defined vacancy in the node. This pocket, made up of say 3,000 m², sub-divisible down to 500 m², was available immediately. However, despite this, Landlord A was not able to let that space. And, inexplicably, in parallel, every quarter Landlord A heard that deals, ranging between 500 m² and 3,000 m², were being done in the node. But, not with her. Yet she is the only vacancy. How? And why?

Sound reasons exist. Those tenants in signed leasing deals were instead going to any of one of the following:

Gmaven’s vacancies definition may be deemed to be wider, expanding its filter for the following:

(Gmaven also includes a tiny fraction of “complex space” where its definition / categorisation according to vacancy schedules is unclear (i.e. either it could be deemed to be “rent-attracting supplementary space”, or conventional gross lettable area))

Will Harris
46 posts
Chartered Accountant with 13 years' experience in the commercial property industry. Love seeing the combination of efficiency tools and data helping people. Passionate about boosting the reputation of this great industry and its deserving professionals. 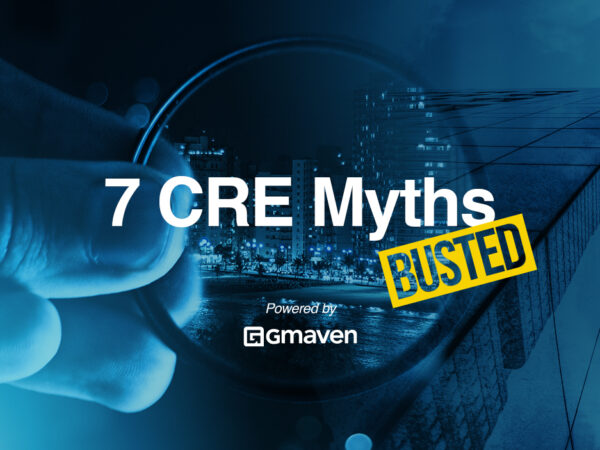 “Evil prevails when good men stand by and do nothing”. Here is our attempt, for CRE industry outsiders in South Africa, at “pulling back the veil” on our industry. The more informed you as customer are, the easier it is to identify and work with ethical and honourable CRE professionals. Excellent service from skilled, passionate CRE professionals means better outcomes for you, and boosts your perception of our industry. 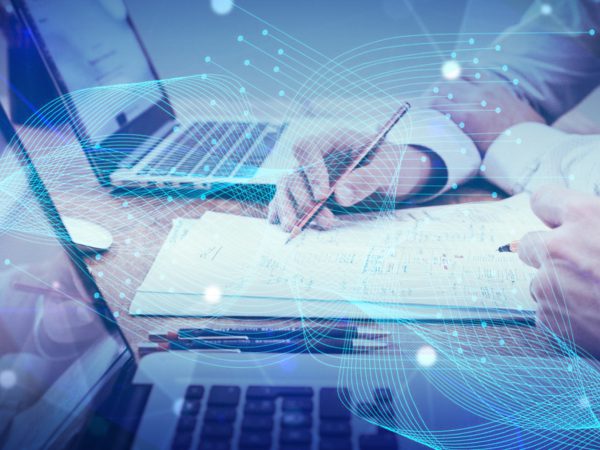 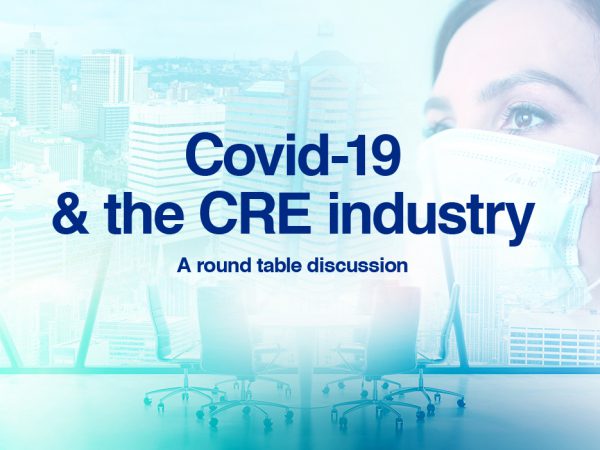